Cuba here and now (spring 2016) is a place filled with rides, walks, talks, and thoughts inspired and daunting. Bureaucracy percolates with mixed emotions and messages among people enthusiastic and anxious and complacent.

Holes a half-metre wide & deeper appear unannounced between horse-drawn carriages & pedal cabs & Edsels & dumptrucks laden with produce & animals & people & whatnot. Worn roads glazed with diesel & grease feel like surfing without a fin — after any rain I ride with my feet connected/sliding across the slick surfaces like training wheels thru cityscapes. In the countryside sugar cane barks thrash off the backs and sides of fast moving trucks and slower wagons to lash my visor. The national four-lane highways are populated with horses, bicycles, motorbikes w/ sidecars, giant trucks, chicken, goats, buses, fast Peugeots and slow Ladas and pedestrians young and old. All of which can stop on a dime in any lane without warning, to let off a passenger or just have a discussion. Constant vigilance required.

Communications here are convoluted and expensive. 2€/hr for super slow intermittent internet in limited hotspots that are recognizable by swells of humans with illuminated faces hovering over glowing screens. There are several economies. Cubans and foreigners alike navigate both CUC (convertible currency) and CUP (national peso) markets. Cubans face challenging wages and markets that vary in shades from grey to black alongside the ever-present diesel fumes. A highlight of the past 3 weeks was finding a shop w toilet paper. 4 thin rolls for 2.70 €. Crazy expensive, as that represents a significant portion (~10%) of the average monthly salary. Instead of loo roll I believe most folks op for using water. Street food hygiene is a big variable. Nonetheless, Cubans are very clean and, like much of the world, they pride themselves on neat shoes.

My mornings consist of a whole pineapple for .60¢. Today’s breakfast of ham omelette sandwich with guava juice and coffee cost 10 pesos ~ .40¢ at my local cafeteria. Yesterday seemed to be the start of potatoe week. All 5 stalls at my neighbourhood farmer’s market are filled with potatoes – a Slavic paradise… this week. The government distributes food. What will be available is seasonal. What will be in the market tomorrow, will be a surprise.

Over 500,000 Cubans flocked to catch the Rolling Stones’ live show in Ciudad de Deportivo ~ more than a ¼ of Havana’s population! And they got a show. Gratis. A :20 minute Midnight Rambler with Mick jamming on the harmonica. More wardrobe changes than a Madonna show – probably due to the humidity. The encores of You Can’t Always Get What You Want and Satisfaction ushered out a flood of pedestrians sprawling peacefully across town in all directions. A few months ago I read a funny line: “what kind of planet do we intend to leave for Keith Richards?” It is rumoured that The Rolling Stones received a request from the Vatican to refrain from playing Sympathy For The Devil. Seems they didn’t get that memo… The Stones fucking rocked a Sympathy en La Ciudad Deportivo de La Habana 2016. Well well well, it’s only rock ‘n roll and we like it! OneTank caught the experience from a rooftop apartment overlooking the City of Sport playing fields. Click here and catch a glimpse of the Cuban police, military, and Red Cross dancing in the streets and on the roofs with Sympathy For The Devil en La Habana! 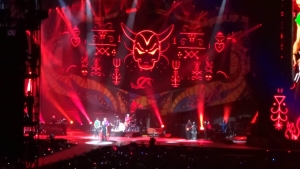 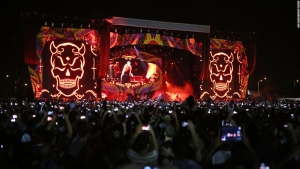 In an article published by The Journal Of Carlos Paz on 10 March 2015, Argentinian writer Pedro Jorge Solans claimed to have uncovered a prophetic quote spoken by Fidel Castro in 1973: 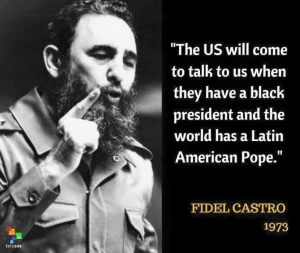 The Stones show was much smoother and less disruptive than the ill-attended Tampa Bay Rays vs. Cuban All-Stars baseball game, which suffered from hyper high security. The Castros & Obamas sat behind home plate for the first three innings. Access was limited to invitations for state employees and select others. I watched the game on an old bunny-ear antennaed television with flickering screen. The public was officially ‘encouraged’ to stay inside throughout the unofficial visit of a Head of State, and warned not to walk the streets with any bags. Multinational canines cased the scene. Traffic was light, where roads were open. All of the Cuban people I’ve spoken with appreciated Obama’s speech. It was broadcast live and not replayed. It is hard to find on the web in the island nation. The US Embassy, which Obama elevated in 2015 from its standing as the U.S. Special Interests Section since 1977, posted the Panfilo clip: Obama on Cuban Talkshow. For more great images from Obama’s visit, check out this feature in The Boston Globe. 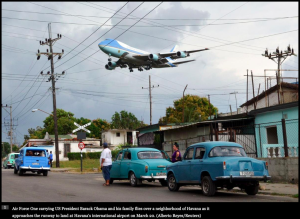 (Foto: Air Force One carrying US President Barack Obama and his family flies over a neighborhood of Havana as it approaches the runway to land at Havana’s international airport on March 20. by Alberto Reyes/Reuters)

While there’s little evidence of violence, theft is rampant. Everyone locks everything up behind gates. My bike, Bleu, garners a lot of gawking similar to the way tourists admire the classic cars from the 1950’s. I found a secured parqeuo for 15cuc/month — the parking lot is full of pedi-cabs. The attendants are hammered much of the time.

Recently I moved into a flat in Old Havana on Sol Street. Both rooms have fans, hoorah.